Formed within a volcanic cone, today Hanauma Bay offers a pristine marine ecosystem after the City and County of Honolulu laid out a plan in 1990 to restore the “curved bay,” after years of neglect and abuse from the millions of visitors who visit and love to snorkel Hanauma Bay. Volunteers have a booth located on the beach level to help visitors learn about conservation of the reef and the types of fish that live there.

Hanauma Bay has long been one of the island of Oahu’s jewels. Native Hawaiians have been enjoying life on the bay for thousands of years. The beach and surrounding natural park get their name from two Hawaiian words: “hana” which means bay and “uma” which means curved. To the Hawaiians, Hanauma Bay has long been part of their history. In fact, there are many legends about how the curved bay got its name. The bay was historically an excellent area for fishing. Records show that the Hawaiian royalty in the 1800s often stayed at the bay for entertainment and fishing. 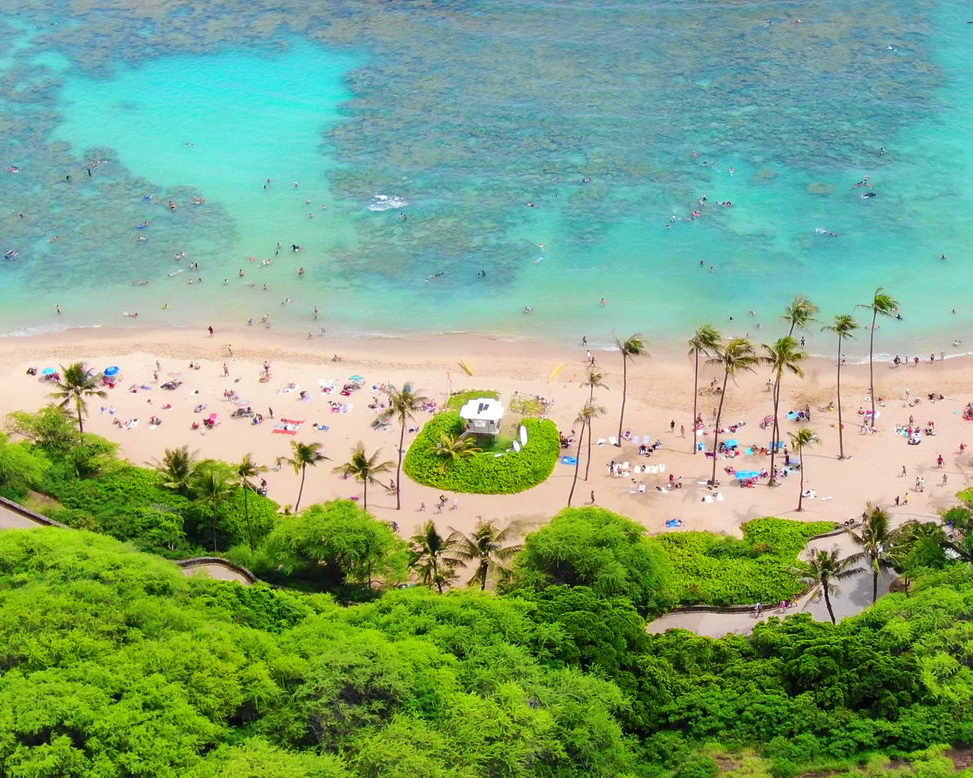 Development of the Hanauma Bay area began at the turn of the century, with a few dirt roads. Paved roads arrived in 1931 along with modest bathroom facilities and a guide rail for the steep passageway down to the base of the crater wall. After World War II, construction of the area increased with new restrooms and showers. Hanauma Bay quickly became a hot tourist spot and suffered from overuse throughout the next few decades. Hanauma Bay was declared a protected marine life conservation area and underwater park in 1967. In the 1990s, measures were taken to start preserving the area and reducing the impact of visitors.

In 2002 a marine education center was opened for visitors and part of the conservation plan requires first-time visitors to watch a 9 minute video before entering the park so they can learn about the marine life, preservation and safety rules for the park. All visitors are required by law to refrain from mistreating the marine animals and from touching or walking on the coral. In the early 2000’s the natural spa called “Toilet Bowl” because of the rise and fall of water with the waves, was closed due visitor injuries and safety concerns.

Today Hanauma Bay sees on average 3000 visitors a day, or approximately 1 million visitors per year and making it the Top 3 destinations on Oahu. Today, Hanauma Bay limits visitors and focuses on educating tourists on the natural wildlife of the area. The vast majority of these are tourists, but locals here on Oahu love this beach as well and many of them visit it daily.

Update: City officials have announced in April 2021 the launch of a Pilot Program with a new online reservation system to help facilitate public entry into Hanauma Bay. Hanauma Bay is now limited to only 1000 guests per day to lesson the impact on this beautiful natural resource.

The bay is now closed to the public every Monday & Tuesday. It is also closed Christmas Day and New Years Day to allow the fish a day of feeding without interruption.